Something pretty hilarious just happened over on Twitter. Well, it’s actually kind of sad and infuriating, but I can’t help but to laugh at the absurdity of it. Lionhead Studios (owned by Microsoft) shared a piece of game art with a busty young lady holding two cold beverages. It’s an ad for The Foaming Jugs tavern from Fable II. I’m not sure if it’s in all three or not, and I’m writing quickly, so look it up. I did beat all three of them, but as I said on Twitter, that was many brain cells ago.

But that’s one of the things that upsets me the most about all this. I feel more personally involved with this decision than I otherwise would. Tim Schafer is a scumbag, but I never really cared for his work anyway. I have a great affinity for the Fable series and even just the Lionhead brand. So I hate to seem them do what they did today. It hurts a little bit more. It’s good for one thing though, and that’s as an example. Rarely do you see such a clear example of what this fight is all about.

They ended up deleting a companion Facebook post as well, by the way. Notably, I didn’t see as much radical feminist bullshit on Facebook, but they took it down anyway. Here’s the rundown: 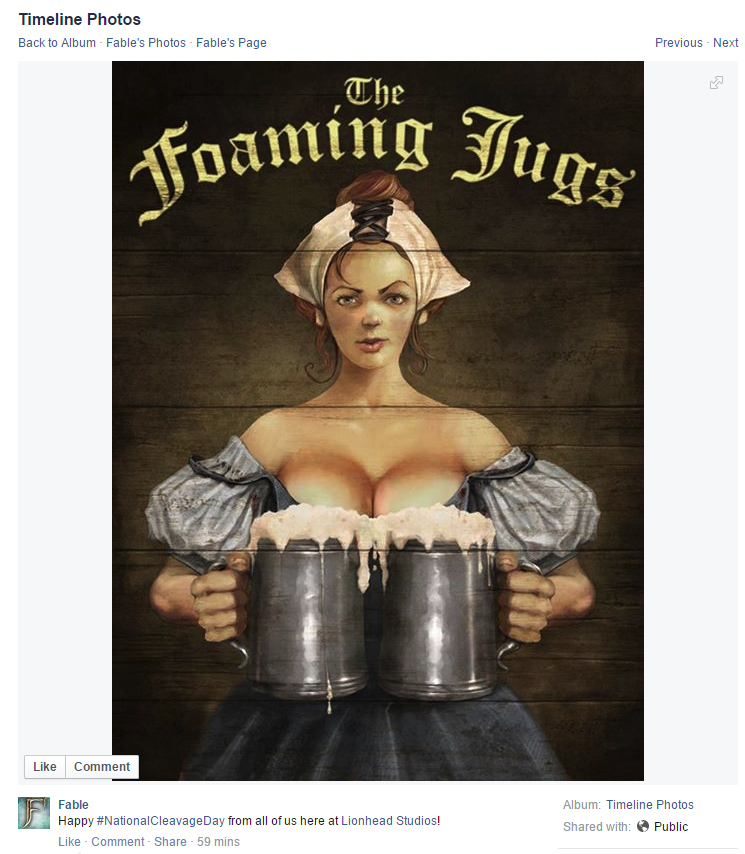 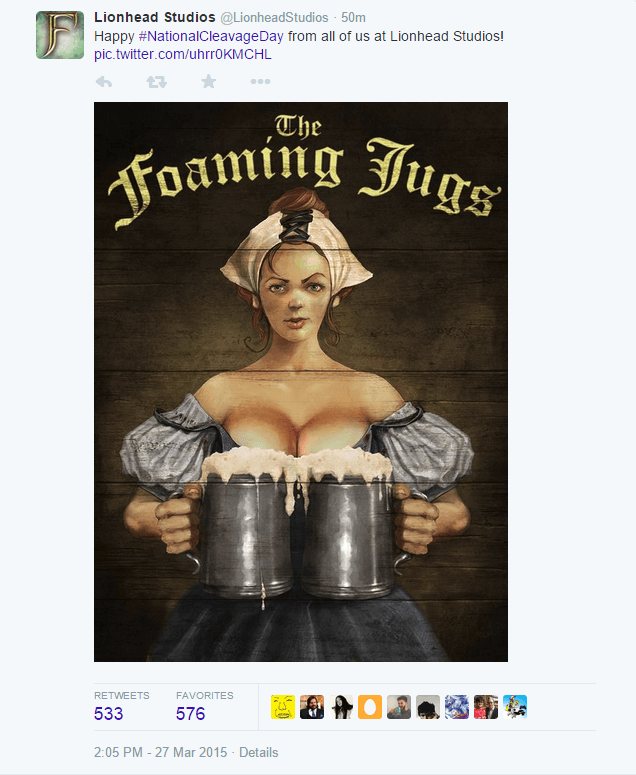 Did you seriously just do this @LionheadStudios

@LionheadStudios Guys, I <3 you, and know this wasn't meant maliciously, but don't we have enough problems with the representation of women?

That last tweet about "cleavage day" with a woman holding foaming beer in front of her breasts was from @LionheadStudios, makers of Fable. 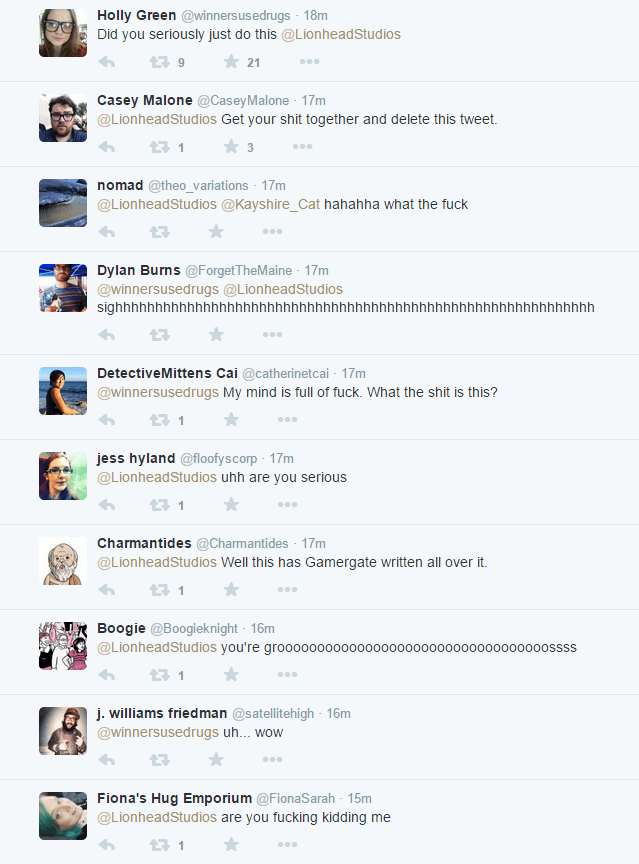 When people started to complain, this was @LionheadStudios response. pic.twitter.com/IiG6TcGcde

Just looks at how many tweets Brianna Wu is shitting out. it’s un-fucking-believable. You would have thought Lionhead just shared some fucking child pornography through their social media accounts. Look at this:

Deconstructing why @LionheadStudios Tweet is problematic. For 30 years, gamers have been told games are men's space. pic.twitter.com/HHvGjyIhRh

What @LionheadStudios doesn't understand is when game studios set this kind of culture, it has terrible repercussions for women.

I'd like to see @LionheadStudios apologize for this Tweet, and pledge to not misrepresent women as sex objects in their promotional media.

I’ll be damned if they didn’t cave to troglodytes like Brianna Wu. They actually came out and groveled:

You apologize for sharing an art asset from your own game? Why would you ever do such a thing? It’s truly stunning. I’m not sure how to react to this. Some people are saying take it easy on Lionhead, but this was incredibly dumb. Also, it makes the climate even worse for other creators who see this. There’s no telling how much damage will be done that you won’t be able to see. It will instead be told by what you don’t see. Also, let me point out one other thing real quick. There’s plenty of women who found that art appealing. You wouldn’t know it by the crazy radical feminists, but there are lesbians and bisexual gamers, and they appreciate the female form.

Here’s some more rundown from Twitter, then I’ll leave it to you. Notice that Casey Malone character above? He’s good buddies with Maya Kramer and Brandon Boyer. I know you’re just as shocked by that revelation as I am (/sarcasm):

What is it that rad fems have against the female form? What a disgusting display with the Lionhead tweet. #GamerGate

@LionheadStudios Way to cave to pressure from a vocal minority that probably won't buy your games.

As @atlasnodded pointed out, this is from their own fucking game, Fable II. Why apologize?#GamerGate pic.twitter.com/b58qiG6klz

(They’re even trying to get the person who tweeted it fired. What a shameful display.)

Images of women SJWs have done away with so far. #GamerGate pic.twitter.com/ZuxBCRoIno

They actually deleted it.

Sex-negative Twitter warriors are a scourge on the Earth.#GamerGate pic.twitter.com/2FUVgDajl8

#NationalCleavageDay @LionHeadStudios Never let anyone shame or bully you into removing your art and designs. pic.twitter.com/Tuj5MYNgfr

How long until they want us to take old works off the shelves because they trigger radical feminists? #GamerGate

Quit shaming women for having bigger or smaller breasts than others.

It's that fucking simple. What's wrong with people?