The hits keep coming for Leigh Alexander and her corrupt benefactors, such as Gamasutra. After my articles last week initially started the fire, we further learned that Leigh has a nasty propensity for racist language and violent imagery. Late this afternoon, Breitbart.com’s Milo Yiannopoulos broke perhaps the biggest story yet, revealing that mainstream gaming journalists use a master email list to facilitate propaganda and collusion. GamerGate has exploded once again, and is now approaching it’s previous all time high on Twitter.

Earlier this week, sources provided me with even more disturbing material from our Dear Leader’s Twitter account. You would think she would just shut that shit down by now, or at least pay someone to comb through it. But apparently she thinks she’s untouchable (that’s what our anonymous industry source believes as well). Here’s the first one, where she says the drunken Irish population of Massachusetts is responsible for their Republican Party voter base: 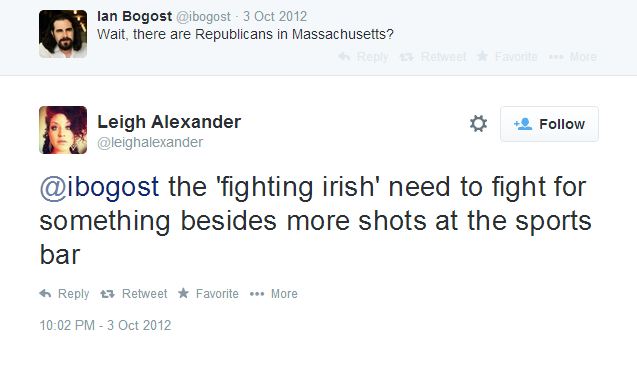 In the this next tweet, she talks about a “hood rat” kicking her ass back in the 7th grade. It seems everything can be traced back to this time period in Leigh’s life: 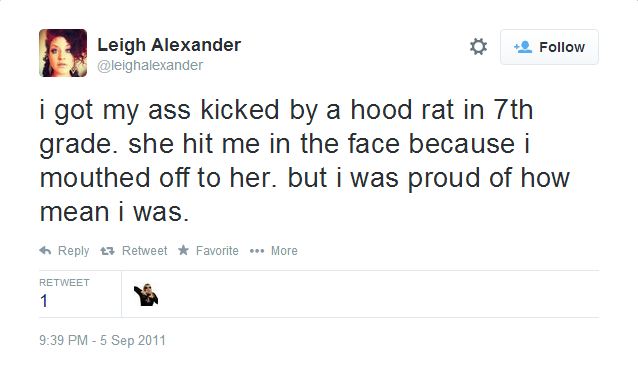 This tweet really could have an article of it’s own based around it. If you’ve spent anytime following these SJWs on Twitter, you will see that they commonly cry about what they call “punching down.” If you look back at Nathan Grayson‘s Twitter, you can witness him crying to Adam Baldwin because the Firefly star mentioned Grayson and Zoe Quinn in a tweet.  This is something that others talked about as well, including Jenn Frank and Leigh Alexander. Well, simply add this to the long list of things that the Dear Leader is disingenuous about. Here, witness her advise game designer Steve Gaynor to do exactly what all the feminists whine about our high profile supporters doing: 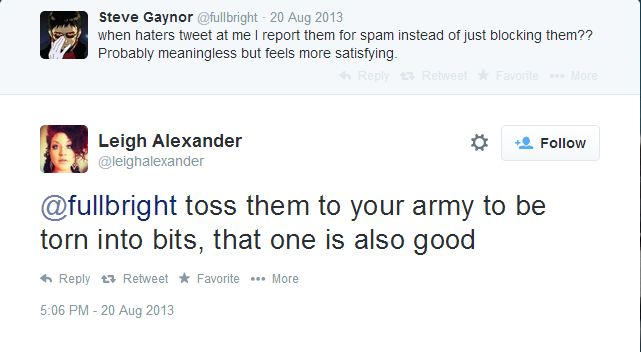 This is a woman who has no problems preaching one thing, and then acting in a completely opposite fashion. She is a phony who uses her position of privilege to entrench a gender hierarchy, rather than strive towards the elimination of gender roles. She gets rich off a “patriarchy” she claims to despise, all while being dismissive to the past and current hardships of other marginalized people. How can the mainstream media continue to perpetuate blatantly false narratives like “Leigh Alexander, champion of the oppressed?” With just the smallest amount of research, the idea becomes laughable.

Call, write, email and tweet. This woman should not be allowed to have such a place of prominence within the video game industry.