I’ve been meaning to write a short hit on this for those that missed it. Last week, a dev on the new Doom game posted a Facebook entry about how he was “winning” due to the backlash he had received from SJWs like Anita Sarkeesian over the game. I didn’t see the post until yesterday, when he was complaining about how some people had interpreted it as an attack on Ms. Sarkeesian. I’m not sure who he is referring to, but one can only assume that he’s talking about some members of the anti-gamer crowd. God forbid someone express an opinion that differs from that infallible class. We saw this with Randi Harper in the last story, and I’ve discussed  it since my first week writing about GamerGate. The rad fems want to instill fear into people and make them afraid to state their disagreements. They want to make going against their agenda dangerous for you and your career. Before forces like GamerGate started organizing, they were largely succeeding.Here’s the screens from Facebook: 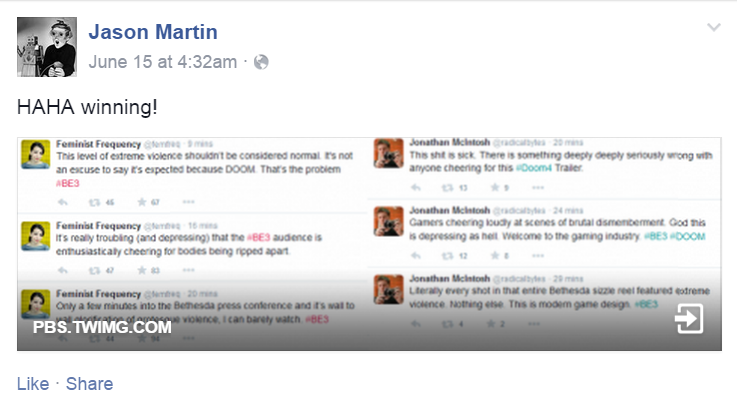 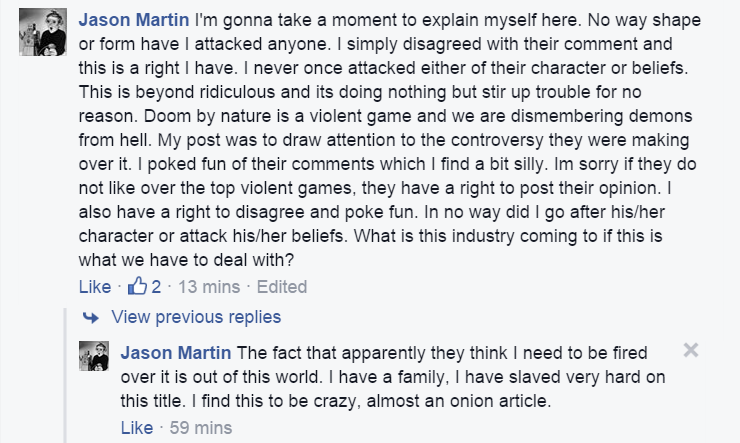 Reddit has the right idea about the recent shift that we’ve witnessed:

The poster is dead-on with his analysis, though. We’ve become the defense force for the gaming industry. Now it’s getting so bad that they run to us when they get smeared because they know we fight on the side of free expression and creative freedom. The SJWs couldn’t give a fuck-less about either one of those. They want to enforce their speech codes and warped ideology by any means necessary.

Expect to see more industry types follow the lead of Deus Ex’s Gilles Matuba and Doom’s Jason Martin. Who else are they going to turn to? In many cases, their own companies are kind of afraid to take the SJWs on. We’ve proven over the course of the last year that we are not. Plus, busting their weak arguments is like second-nature to us now. So step right up, devs. We’re more than happy to go to bat for you.