What is wrong with these people? It wasn’t enough to denigrate the service of men like RogueStar (aka Slade Villena), by saying they were taking advantage of their former military status in order to advance the cause of GamerGate. No, chickenshits like Arthur Chu had to take it one step further. They had to go and give Anita Sarkeesian military status. Think of all the blood, sweat, and tears shed by real military. How on earth could a YouTube swindler be compared to our greatest heroes? The mere thought of it ought to turn anyone’s stomach.

I don’t think I could have said it better myself, Simon. These people are fucking idiots. But they’re not your everyday, garden-variety idiot. They’re dangerous idiots, because their poisonous ideology threatens the livelihoods, hobbies, and customs that we hold dear. they don’t even try to hide the fact that they are radicals. They know they don’t have majority support, and that dishonest agitation is the only way that they can come out on top.

Look at some more from Arthur Chu below: 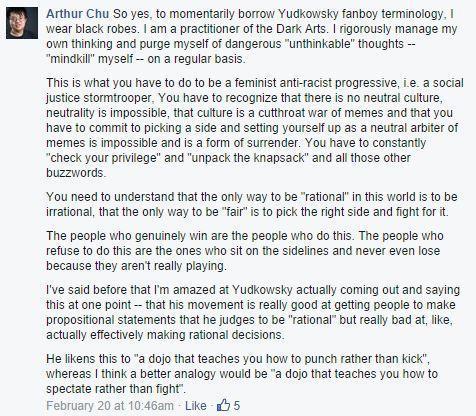 On the grand scale of things, I guess this isn’t as bad as comparing us to ISIS, or threatening to punch a GamerGate member at Comic Con. But, it’s just further evidence of cultural misappropriation by the SJW side. Now they presume to have the same status as military veterans. Any unearned label they can find, they take for themselves. These leeches can only be stopped by exposure. They count on attacking weakened forces. By the time everyone organizes, the SJWs have usually won. GamerGate is the most advanced fighting force that they’ve ever faced…and they don’t know how to handle it.