What in the world is it gonna take for Twitter to stop this abuse by WAM, and/or their affiliates? I know they usually end up restoring the accounts, but this shit is ridiculous. Earlier today, the account of Camera Lady, an early and prominent supporter of GamerGate, was taken offline without explanation. Just like RogueStar before her, she’s gotten caught up in the SJW hate machine. Twitter is asleep at the wheel, and refuses to upgrade whatever it is they need to upgrade to stop these intrusions on speech. 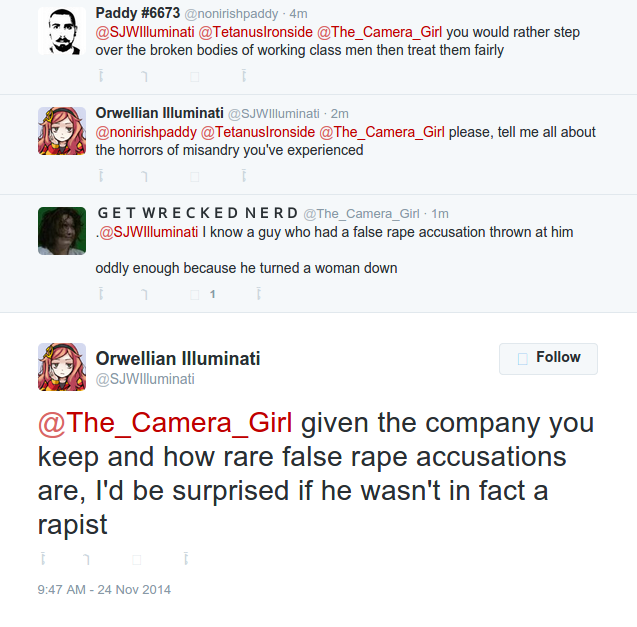 How many times are SJWs going to abuse the service and get away with it? Freakshows like Randi Harper openly break the rules, and they do nothing. I get ominous letters sent to me over “nonviolent threats.” The only person I can figure who said that about me, is her, by the way. I put out a tweet and said I guess they were going to call me a harasser when I release this info on Randi. I was talking about her tax lien.

The funny thing is, they called me a harasser before I even released the info! So I was wrong lol. And how is it a violation? She’s a public figure partaking in public debate. This is relevant. She’s clearly trying to set her self up like Zoe and Anita. That wouldn’t be a bad strategy, if she had any talent. But like someone on Twitter told me yesterday, that hasn’t stopped these people before. So, she’ll probably have a fat Patreon before all is said and done.

It doesn’t matter what you do, SJWs are going to label you as misogynist scum…unless you totally submit like Arthur Chu. Twitter continues to sleep, but at least they haven’t completely folded YET. I keep thinking that day may come, though, so be prepared. It may be a massacre type situation without warning, if they do ban GamerGate. Concerned consumers are hoping you’ll do the right thing, Twitter. Don’t give in to fascists.

UPDATE: Camera Lady wanted you guys to know that she’s still active haha. It’s just the main account that has been nuked.

UPDATE 2: She’s been getting nuked all day. Looks like Twitter has given her the death sentence for now.