There were lots of happenings that I missed during my slumber. Among them, was the harasser-in-chief Randi Harper launching an attack on Brianna Wu over her “defense” of KotakuInAction. I put that in quotation marks, because it wasn’t really a defense at all. it was more like a way to completely neuter the KiA subreddit. She wants it to still exist, but only under her bogus rules. No one gets harassed from there now, so why change anything? Asking tough questions is not harassment, no matter how many times the idiots on the other side say it is.

But even this bogus statement (that she released on GamerGhazi) wasn’t enough for Big Randi. She took it upon herself to shit on Wu. I can’t say I was sad to see it, but it still shows you how she thinks. A complete wipeout of GamerGate and its outlets is the only goal she’s interested in. Any accommodation is out of the question. A free and open debate is worthless to someone like Harper. Here’s the rant straight from the horse’s mouth: 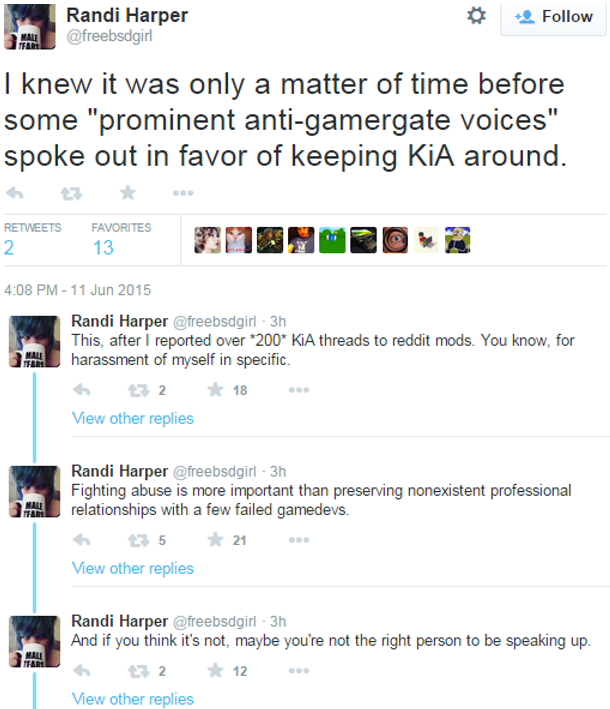 No arguments about Wu being a completely disgusting character, but this is Randi Harper pointing it out. If there was ever a bigger case of the (huge) pot calling the kettle black, I’d like to see it. Harper has a lot of nerve telling anyone they aren’t the right person to deliver a message. This is a woman who has told people to set themselves on fire, called them all sorts of vulgar names, bullied a man with MS on the day he got his diagnosis….and this is just a very short list of her transgressions. Now, she wants to stop Internet abuse. Maybe she should start by getting rid of her computer and mobile devices, then shutting the fuck up. Because from where I sit, Big Randi is one of the biggest harassers in recent online history.