BACK TO THE FUTURE: One Year Later, Brianna Wu is Still a Crazy Camera Hound

Someone sent me some shit a couple days ago on Brianna Wu. I don’t mean that it was anything new. Nah, it was the same shit I had been seeing on Twitter that day. But, they suggested that this could make a good write-up for the site. I was thinking the same thing already, truth be told. It’s just that other shit got in my way. It’s 5AM on the East Coast, and I figured “what the hell?” Let’s get the morning started off on the right foot by laughing at Brianna Wu’s crazy ass (I started writing this before my nap. lol).

When I say Wu is a nutter, I mean that in the literal sense. Brianna is a psychopath.

Let’s take a look back at Wu getting destroyed by 8chan’s Hotwheels, which is the first mention of that creepo I can find on my site…

Throughout her appearances in the stream, she violently swayed back and forth, gesticulated like a insane person, and repeatedly tried to interrupt and bully Mr. Brennan. Oh, did I mention he’s in a wheelchair, thus the name Hotwheels? I’m no media expert, but it’s not usually a good look to try to bully a disabled person into giving up his business live on the air. Perhaps Ms. Wu, who appears to have forgotten to take her meds before this appearance, didn’t realize the optics of the situation.

Conversely, Brennan kept his composure throughout the segment. He was calm, witty, and very funny. Rather than let Troll Queen Wu bait him, he countered her with facts, and hilarious comebacks. If you were a neutral watching this show, Based Hotwheels had to look pretty damn good. Did I mention he was in a hostile house, with no allies? Yea, Kain was there, but he’s neutral, and barely got to talk anyway. The courage that the leader of 8chan showed was nothing short of inspiring.

But, as I said, the media won’t let that happen. So, let’s take an unauthorized look into this craven character. According to reports, she’s a longtime loon (UPDATE: YouTube has since removed that video, but it was put up again on DailyMotion). Keep in mind that these are unverified reports, but you can be the judge. They seem more than credible to me. This message board has some interesting tales to tell about Wu’s past. Again, more crazy:

“The first time I met him, I was the opinion editor at The DM [EDITOR’S NOTE: The Daily Mississippian], and I turned to see this creepy fuck standing behind me. I shook his hand, and he pulled it away, saying “oowwww.” He then explained that he’d broken his wrist in a bicycle accident that had almost killed him and had given him amnesia. He explained that he wanted to be a columnist and that he had previously worked for George W. Bush in the white house but that he had since realized how retarded and evil all conservatives were. About this time my phone started ringing, and I politely ignored it while I talked to this guy. Then it rang again, and again until I answered. It was the managing editor, who had ducked behind the front desk and was whispering, “stay calm, and don’t react to this, but this guy isn’t supposed to be here. He has a restraining order. Get rid of him.” By this point, I was concerned the guy might knife me at any moment; so I told him to write me three columns and that I’d evaluate them and get back to him on whether he could write for me. (I’m still proud of my ability to remain poised and convincingly pretend that the dm had any fucking standards.)

Turns out, a year prior, he’d come in wanting the dm to run a comic strip that he was doing. When he was told they weren’t interested, he flipped out. He called one of the workers a fat dyke, and when Dr. Husni came to her defense, he called him a “raghead” and a “sand nigger.” They got a restraining order to keep him away from Farley, but when they moved to Bishop, it no longer applied, and he was actually able to weasel back in to working for the SMC.”

Take it how you want, but if true, it sure seems like Brianna Wu had quite an interesting undergraduate career. I managed to make it through college without the campus newspaper putting a restraining order out against me.

Yea, almost all the good Wu shit originated with this site and my researchers. That’s a fact. We were breaking stories left and right. This is from the very same day the previous story was posted:

Now, since we’ve gotten that our of the way, let me just drop a little bit of knowledge. I’ve come across an old LiveJournal of Ms. Wu’s, and I’d like to share a little sampling with you all. I’ve already posted a little bit on Twitter, but here’s a full section:

I don’t especially feel that gays are allies when it comes to women. I think that we usually get along well, but I have occasionally felt that gays see us primarily as competition for the penis. When I watch drag queens, I can’t help but feel insulted – as if that offensive cartoon is what they think feminine truth is there are so many issues women have that gay men never have to think about. Our increased health care costs, equal pay issues, access to reproductive health care and the threat of rape and violence. Concordantly, there are many gay issues that don’t affect me – I’ve never had to worry that society didn’t approve of my sexuality or marriage rights.

It does help that our enemies are the same, the fundamentalist conservatives that would deny us the right to make our own choices. The lunatic fringe would deny me the right to make choices about my body, and they’d just as quickly send the gays off to sexual reeducation camp. We are united against the patriarchal oppressors that think they know what’s best for us.

Everyone makes fun of Christians, it seems. In fact, the only other group it’s acceptable to slander as much as Christians is fat people.

My question to you is this: if we can all agree that it should be off-limits to slander niggers, broads, fags, chinks, wetbacks and nappy-headed hos, why should any of us feel so openly empowered to make fun of Christians?

To be honest, I haven’t had time to comb through this whole thing. If people haven’t picked it clean by tomorrow, I may run another story. I just wanted to drop this short tidbit tonight, for those saying we never uncover anything here at TheRalphRetort.com. Of course, those people are full of shit. All you have to do is look at my history. But, keep up the good work, haters. You definitely keep me motivated.

So, after reacquainting yourself with Wu’s craziness from last fall, the question is, has anything at all changed? I’m here to tell you the answer: fuck no. Not a single thing has changed. Well, OK, there are a couple of things. Brianna is uglier than ever and appears to be on some heavy anti-psychotic medication. The other thing that strikes me as different? Wu has clearly gotten accustomed to being an authoritarian mouthpiece. This is now the new career the sick fucker has in mind. Game design? LOL, that’s for plebs. Plus, it’s so much work! It’s much easier to just sit back and run your mouth. Hell, I should know.

Take a look at the latest from Wacky Wu, in case you haven’t seen it until now. Let’s start with another flashback first, though… 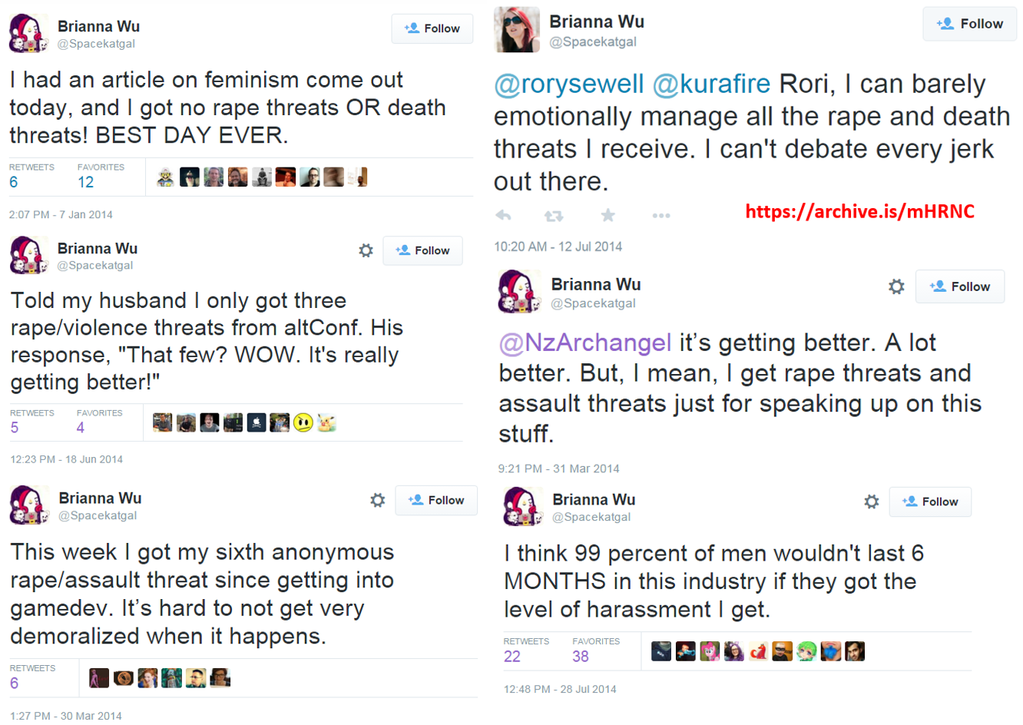 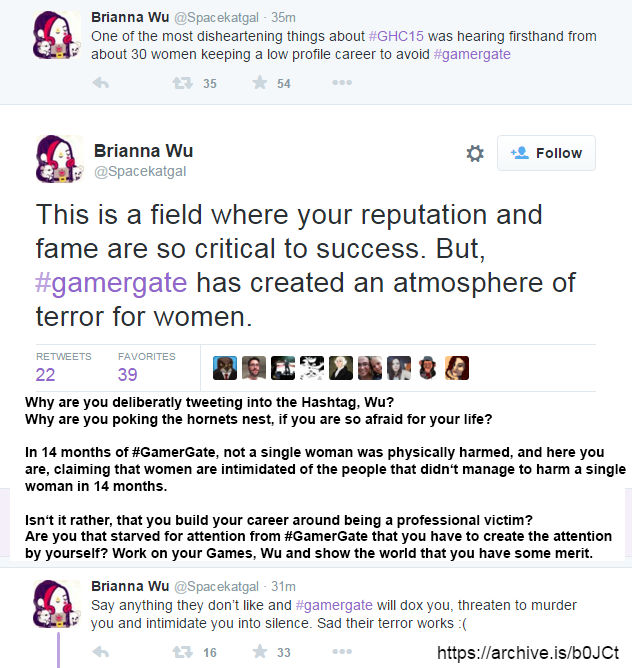 If you’re so fucking scared, why do you keep tagging GamerGate into your crazy bullshit? You would think that someone who is legitimately scared would stop provoking this supposedly violent mob. It’s almost like you don’t believe your own spin, Wu! People who are legitimately afraid don’t behave the way you do, freak. You’re a phony and a fraud, and I’ve known that since you first came onto my radar. Anywhere there’s a camera or a sympathetic SJW scumbag reporter, you can be rest assured that the gangly and disgusting Brianna Wu will not be far behind. Nothing has truly changed. Back to the future, indeed. The only new wrinkle in this story is that the headcase has had a touch of fame and is now completely hooked. I don’t think things are going to end well, by the way. Overdose, self-harm…one of any number of things could happen when the attention dries up. I won’t be shedding any tears, regardless of the outcome. Liars and propagandists hold no special place in my heart. Fuck their existence. 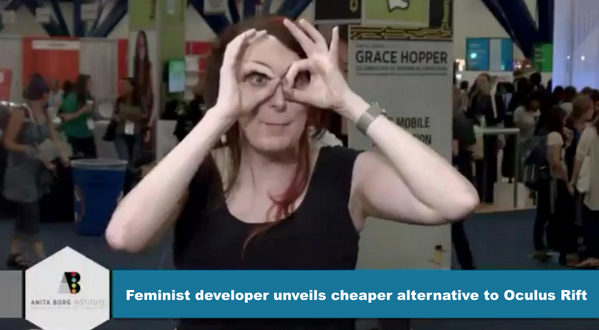 Check out the LIVE show, tonight at 6PM EST. We’ll be talking about all this week’s news, as well as whatever else comes up during the broadcast. I look forward to it, as always.