I was just told by Mundane Matt to work faster on getting this column done. That was a fair point. So, I stopped fucking around with webmaster type shit and here I am at the desk. I heard about this story earlier on in the day, while I was watching the seminal TV series Skins. I’ve only seen the first “class,” but it’s one of my favorite shows. It definitely wasn’t worth stepping away from to talk about the professional troll who now goes by the name of Brianna Wu. Plus, now I have all these cool tweets to share with you…and it’s not like Brianna hasn’t gotten any saner over the course of the day.

In fact, after reading this column, I’m left scratching my head. Is she really trolling? Or is she legitimately insane? I have to say, having seen her in person, that she does appear to be quite unhinged. Still, she’s sane enough to parlay her craziness into a career as a spokesperson for Tumblrinas and sicko SJWs. I guess it’s a mix of nuttery and fakery. Regardless, it’s total bullshit. Read this excerpt of Wu’s piece from, who else, The Mary Sue:

That’s why I’m thrilled to tell you that one of the most famous women in videogame history happens to also be a transgender woman! It’s none other that Nintendo’s Samus Aran!
It’s true! In 1994, the writers of the official JapaneseSuper Metroid strategy guide asked Metroid’s developers if they could share any secrets about the intergalactic bounty hunter. Hirofumi Matsuoka, who helped work on the original design for Samus Aran, claimed that she “wasn’t a woman,” but instead, “ニューハーフ,” or “newhalf.” This language has its own issues, but terminology used for gender in the early 90s was as different in Japan as it was in the West.

People did some digging, and they found out where Wu got this crazy fucking idea planted into that demented brain: 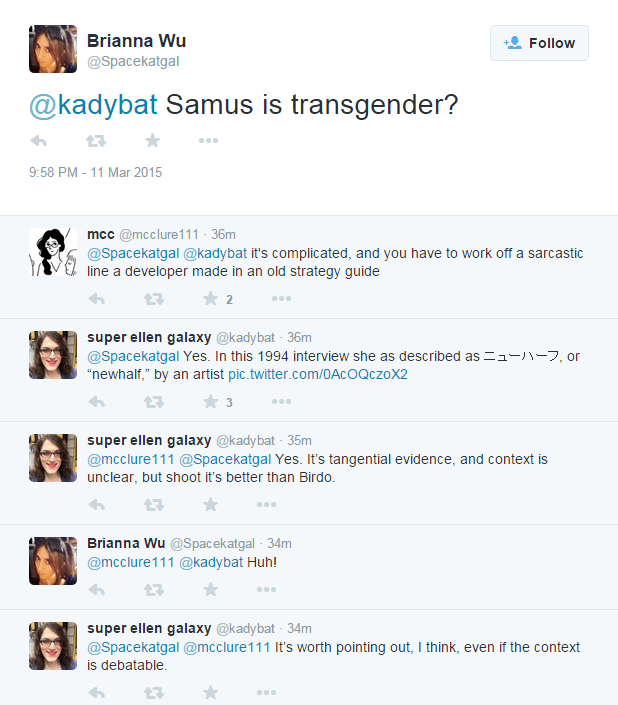 Even these clowns seem to be admitting that the theory is lacking. There’s a very good reason for that. It’s not true. Read what Sakamoto Yoshio had to say about this theory. He’s the co-creator of the Metroid series, a designer on the first game, as well as the director of Super Metroid, Metroid: Zero Mission, and so many others it would take another paragraph to list them all. Here’s his quote:

As if all this wasn’t ridiculous enough, Wu has now been accused of trying to throw her own article into the Samus Wikipedia page. Here’s that screen, followed by a few tweets: 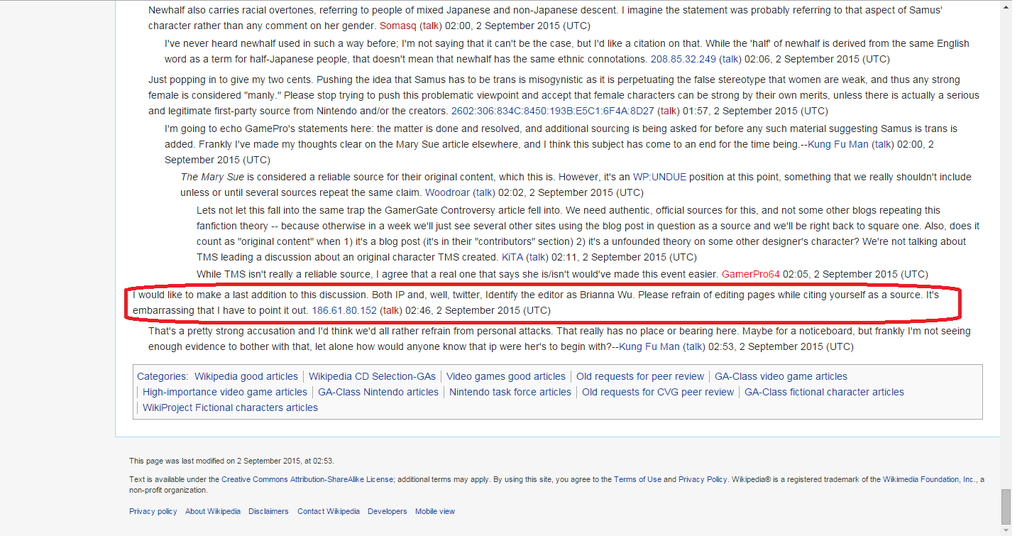 Whether it’s her or not makes no difference. This whole thing is fucking nuts. So now one of the most beloved female characters in the history of gaming is trans…because Brianna Wu said so? I don’t think so, you gangly headcase. Look at how Wu’s playing it. The fucker knew this would cause waves, and now that’s being spun into some sort of transphobia narrative:

Even many anti-gamers were calling bullshit on all this:

Now you can clearly see the goal of this entire exercise: putting more money into Wu’s pocket by enhancing her victim narrative. It’s unseemly, but no more so than her trying to say GamerGate was planning a sarin gas attack, or stopping her from finding her birth parents. In other words, this is all par for the course. What will the psychopath think of next? Is Mario a toastkin? What about Peach, is she pansexual? Luigi looks like he has some wild shit going on. Tell us about that next time, Bri. As for me, I’m going to go cleanse my palate with some Metal Gear. As always, lemme know what you think about all this down below, in the #BasedCommentSection.