We’ve talked about a lot of sketchy characters here at TheRalphRetort.com. One day, I should do a greatest hits column. Anita, Leigh Alexander, Big Randi, Wacky Wu, & Crazy Chu…the list is goes on and on. But some of these people are just scammers. They may believe what they’re saying, or they may not. The end goal is simply to get paid. Just look at Ms. Alexander from the other day, for example. One person has always struck me as a true believer, though. Not just that, he’s so far gone that even some other true believers are like, “Damn, this guy is fucking nuts.” I no longer think it’s an exaggeration.

Jonathan McIntosh is crazier than a shithouse rat.

Look at the insanity he was spewing about Batman and Tomb Raider:

You can feel the hatred this man has for video games. That's why he's set out on a mission to ruin them.#GamerGate pic.twitter.com/kwbzGHfTTK

That’s not what they’re doing, Jihad Jon. They’re talking about the game, dipshit. No one is saying go out an be Batman in your real life. What the hell are you even going on about? It’s a work of fiction. Anyone with half a brain knows that they shouldn’t try to imitate Batman, even if that were a possibility. #FullMcIntosh didn’t stop there, however. Next, he went in on Tomb Raider: 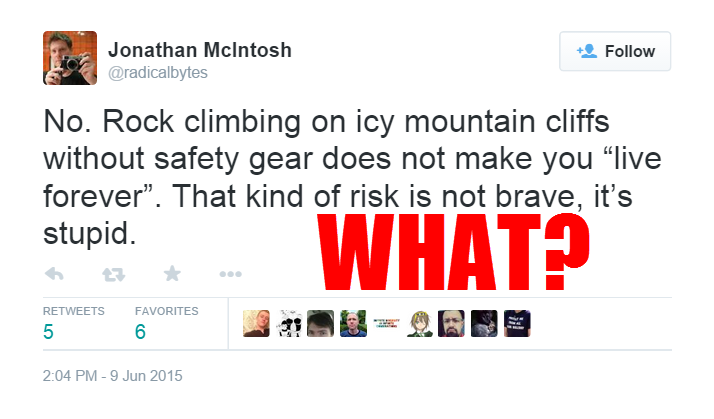 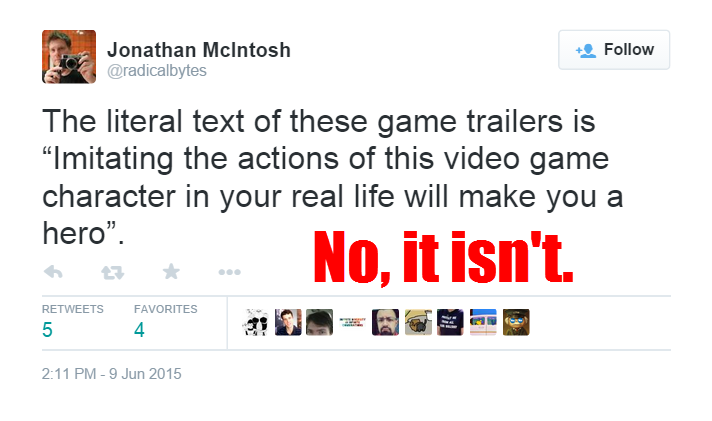 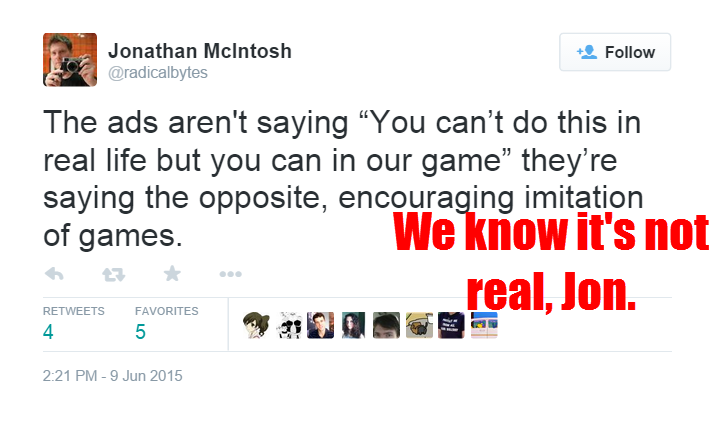 I feel like I’m talking to some non-wrestling fan who keeps telling me it’s not real. I know it’s not real, you stupid fucker. Neither are all the dumbass TV shows you watch. The same goes for this. We know the games aren’t real. They shouldn’t be the basis for real-life actions. Now, you might use the themes from them to inspire yourself, but that’s about as far as it goes. I’ve played Tomb Raider, and it was fantastic. I even bought the PS4 edition to playthrough again (although I haven’t yet). Never once did I think about scaling towers or shooing someone in the neck with an arrow in my day-to-day existence. Might there be a minuscule number idiots who do emulate fiction in real life? Yes. But imbeciles can’t be the deciding factor in what the overwhelming majority is allowed to consume.

Did somebody hacked into #FullMcIntosh account? Or is this "wisdom" really meant seriously? pic.twitter.com/40cRdiikHU

As someone said last night, McIntosh is doubling down on stupidity. It’s the only act he knows. Unless he’s tweeting from Anita’s account, most people just laugh at him anyway. Imagine how emasculating that must feel. He’s a hack and a joke who has to hide behind a woman’s skirt to get any play at all. When she flames out, his entire career with be done as well. I guess he can go back to making anti-American art and/or hating on the troops. There will always be a market for that kind of trash.