Wow, you guys ready for some huge news? As you might be able to tell from the headline, this is one of the biggest announcements I’ve ever had the pleasure of bringing you. We’ve talked for over a year about putting a dent in the SJW-controlled gaming and tech press. I’ve written over 1000 articles during that time, and I would say that well over 600 of them have been about that issue. Whether it was pointing out their biased bullshit or examining the odiousness of one of their hacks, we’ve talked about their corruptness for quite some time. Now, we’re finally going to see them get a real challenge thanks to our friends over at Breitbart.

Today, they’re launching a new “vertical.” That’s just a fancy name for a spinoff site, but why not take a look at the term for shits and giggles?

The term “verticals” in business refers to a vertical market. Basically, a vertical market is one where businesses and marketers cater to the needs of a specific group of people within an industry. This concept is in contrast to a horizontal market, where the focus is diverted to a large amount of people regardless of industry.

Breitbart News has spent most of the last decade assaulting what it sees as the sacred cows worshiped by liberals in government, journalism, and Hollywood. Now it is turning to Big Tech. On Tuesday, the right-wing news site is launching Breitbart Tech, a new section of its website focused on technology.

The man in charge of the effort is Milo Yiannopoulos, a British journalist and provocateur who co-founded the tech site the Kernel before moving to Breitbart. The site has hired six full-time staffers dedicated to subjects like e-sports and free speech on the Internet. Expect not to see much coverage on, say, the economics of venture capital, and a lot on the simmering culture wars that happen in the far corners of Reddit. There will also be plenty of Yiannopoulos himself. His writing generally casts himself as the protagonist, and his articles tend to start off with phrases like, “I’m a slut, and I have been shamed,” or “I am always right.” A Fusion profile referred to him as the “ultimate troll.”

To judge by Yiannopoulos’s writing for Breitbart so far, the biggest issue in tech isn’t government spying or overvalued startups. It’s women. Most of Yiannopoulos’s tech reporting for Breitbart has focused on Gamergate, the year-long controversy over gender in gaming. The mainstream media has mostly covered the movement as a semi-organized campaign of harassment against prominent women in video games (Bloomberg Businessweek ran a cover story on the controversy last November). On Monday, the organizers of the South by Southwest conference cancelled two panels on gender in gaming, citing unspecified threats of violence.

Yiannopoulos mostly sees technology companies as hamstrung by their own progressive ideologies. Feminists are attacking tech and gaming companies because the awkward men that run them are easy targets, he says. He stresses that he loves women but maintains they are underrepresented in tech due to basic differences between the sexes.

As for Breitbart Tech, Master Milo is going to be at the very top of this operation, and I’d say his last year of work has perfectly prepared him for this role. The rock-solid Allum Bokhari will most likely be there as well, along with some new people you may (or may not) not have heard of. Still, you’re likely familiar with Breitbart’s style of speaking truth to power. That will continue here no matter where that power lies. If it’s an out of control press slandering gamers once again, Breitbart will be there. If it’s a corrupt publisher raking loyal consumers over the coals simply to squeeze a few more measly dollars out of them, Breitbart will be there. If it’s a sleazy drunk saying “gamers are over?” Well, you get the picture. Instead of demonizing customers, these guys have radical notions about respecting and honoring them instead. I know. It’s a big shift from the likes of Kotaku, Polygon, The Verge, and WIRED. This challenge is long overdue, to say the very least.

Also, this isn’t about being politically correct, or covering for an indie dev friend cause they sucked off a writer last weekend. Breitbart is going to give it to you straight. As I said, the site launches, well, now. Expect to be hanging out there a ton this week, because the team has a lot of content planned for the rollout. I’m pretty fucking excited about it myself even though I’m your resident jaded blogger. So we’ll be talking about it plenty over the next few weeks. If possible, I’ll have a RSS feed of the new site up on the side of TheRalphRetort as well. I want to thank Master Milo once again for putting his career where his mouth is. I’m sure this isn’t going to be a walk in the park. It will take a lot of hard work from the staff to make it succeed. Loyalty will be needed from you all as well. This is a very big step. I hope you’re just as excited as I am about this epic development. This is the game change we’ve all been waiting for.

From the Breitbart Tech unveiling…

On Wednesday night, join us for an epic six-hour livestream with the entire Breitbart Tech writing team and a raft of familiar faces from YouTube and personalities from some of the biggest internet culture and free speech controversies of the last twelve months. More on that tomorrow.

Oh, one last thing! On Friday this week, tune in for the return of fan favourite RADIO NERO, a weekly podcast about tech, gaming, internet culture and free speech online with Milo Yiannopoulos, co-hosted by Allum Bokhari. Sit tight for more news on that.

The demand from geeks, gamers, and web users for an alternative voice in tech media has never been greater. Breitbart Tech will meet that demand, as we have done is so many other areas of news coverage, with uniquely smart, funny, irreverent coverage. Sit back and enjoy the fireworks.

Master Milo already has an interview up with Donald Trump:

BREITBART TECH: What’s your position on the NSA? Has it overreached in recent years, or is it an essential line of defense in the fight against terrorism?

TRUMP: The National Security Agency (NSA) is charged with collecting electronic intelligence from a host of sources around the world and from those who live in America who might wish ill on our country and its people. To accomplish that mission, the NSA has been given great latitude in how it conducts itself, especially after the events of 9/11.

To the extent that the agency can accomplish its mission without violating the Fourth Amendment of the Constitution, it should be given as much leeway as possible. However, American citizens are guaranteed certain protections. There must be a balance between those Constitutional protections and the role of the government in protecting its citizens. Congress should continue to be the arbiter of that balance.

I also have to post this cartoon, since it’s so fucking hilarious… 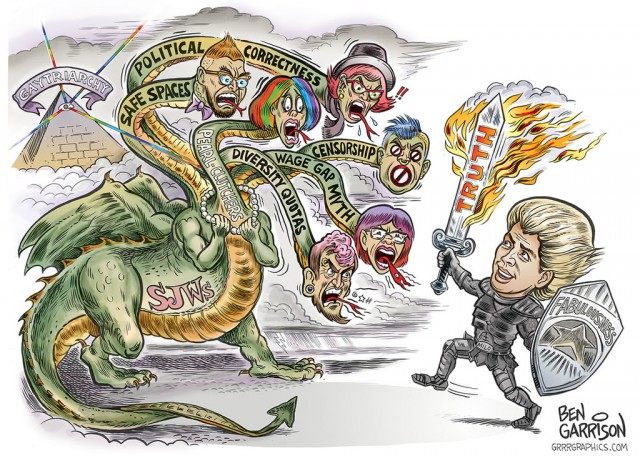 Oh, and Milo has more, this time firing a shot across the bow at the competitors of Breitbart Tech…

The cold hard truth is that the social justice warriors the media props up as champions of diversity in the industry will never accomplish great things in gaming. They uniformly lack the skill and dedication to create great games, which makes their choice to focus all of their energy on diversity, authoritarianism, and third-wave intersectional feminism logical, albeit odious.

But what the games press doesn’t discuss is actually much more interesting and important than what they do. Several weeks ago the Entertainment Software Association Foundation announced scholarships for thirty women and minority students interested in entering the games industry. It boggles the mind that the gaming industry itself devoting $90,000 to kick-start the careers of thirty young women and men would not be newsworthy to writers that are seemingly obsessed with diversity.

I’ll keep this space updated throughout the evening. I’m going to go work on the next post, but check back later for more news and reaction.