It’s was busy week for me on the personal front, so again, I apologize for the paucity of posts from yours truly. I should be back to full speed this week, if things go as planned. I do have a couple personal errands later today but I’ll still get some stuff done before I go and after I return. The first item on today’s agenda is a little chat about an old friend: Brianna Wu.

OK, Wu is not technically a friend. But the nut has been friendly to my AdSense revenue, since so many people enjoy reading about her psychosis. I cannot even properly recount the number hits we’ve done on Wu’s buffoonery and unhinged behavior. You can click the tag below this article to see more, but suffice it to say, the list is large. Days before the election, Wu insinuated that the FBI had been infiltrated…by GamerGate. Then there’s the college degree lie. Oh, and what about the time her former employee shredded her lies and exposed fraud associated with her public claims about game development?

Who could forget the sarin gas claim? I think that’s probably my personal all-time favorite. The point is, this is a dangerously insane person who will continue to provide miles and miles of fodder for people like me. That would only be enhanced by the mission Wu has been talking up as of late: Running for public office. 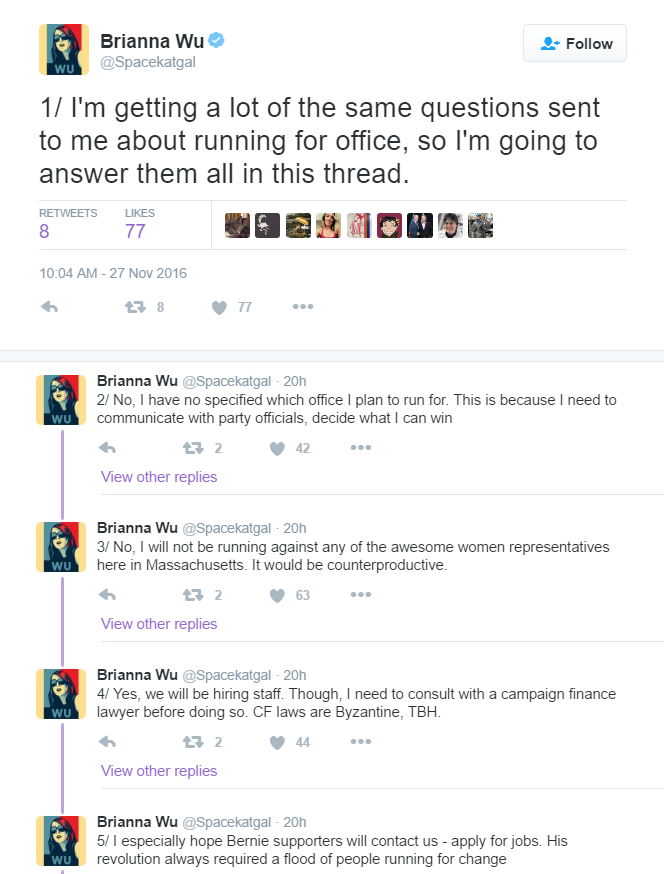 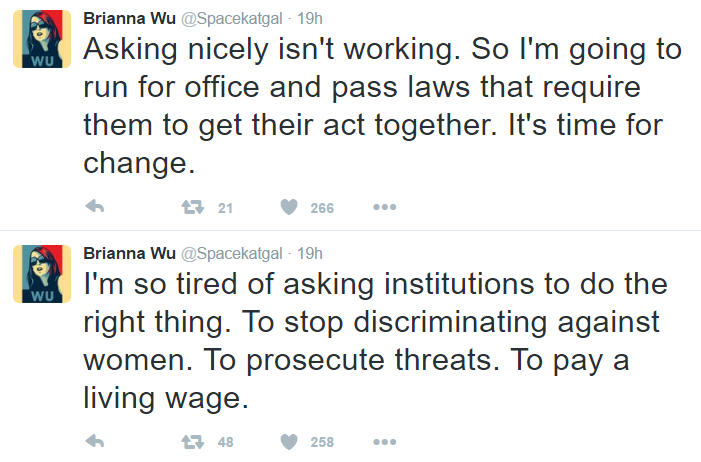 I, for one, support Wu’s proposed run 100%. I mean, I’m not suggesting anyone actually vote for her. Don’t get me wrong. But it would be the funniest thing to happen in a long while…maybe ever. Can you picture this crazed person on a debate stage? I’m laughing just thinking about it. Part of me thinks this is just a stunt to squeeze more cash out of SJW-types who haven’t realized what a fraud Brianna is. And that’s probably what this is all about. But please…please…let this happen. I’ll even make a trip up to whatever Massachusetts shithole Wu tries to run in.

I wonder if she will try to have a member of the media thrown out of one of her events? Surely not.