IGDA Is a Cancer On The Gaming Industry

I’ve written about IGDA, the International Game Developers Association, many times before. None of it was positive. They were founded by a radical named Ernest W. Adams, who has called GamerGate a “criminal conspiracy”. That same man has threatened to help blackball any pro-GamerGate developers. IGDA affiliated researchers stole my Leigh Alexander article, and made it publicly available for download for months. I’ve received emails saying that I was a target of theirs (which was funny). Based on what I’ve seen, IGDA is one of our most debased enemies. Recent events only make that more clear.

Yesterday, their executive director, Kate Edwards, put out an “Anti-Harassment Resource” that included the blocklist tool from noted tax delinquent Randi Harper. She’s so shitty at actually making a working list, that it included accounts like KFC (which has inspired a day full of jokes at the idiot Harper’s expense). But, the unfunny part, was it also included developers like the IGDA Puerto Rico chairman, among others. This is just the sort of thing that Ernest W. Adams was talking about. It looks like his protege Kate Edwards was trying to actually carry out his demented mission. 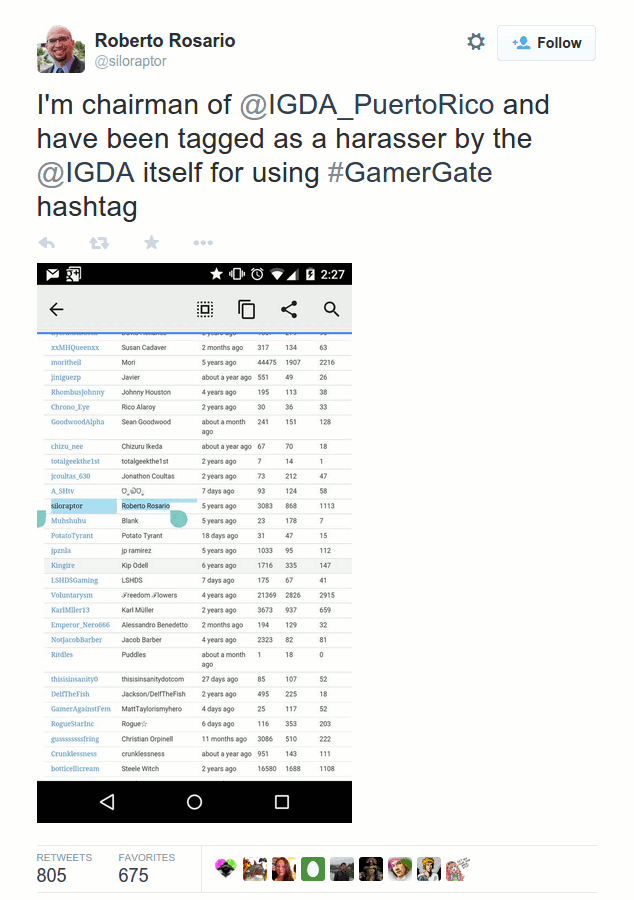 They also hosted the event where Liana K supposedly told her “joke.” Whether you want to believe that or not (I obviously don’t), it’s further evidence that these people have their hands in all sorts of negative plots and events. It’s not fucking right to joke about corruption, either. Maybe you should get off your ass and do something? Then, consider that the IGDA director has made it her goal in life to defame the members of our cause. Take a look at her tweet from October: 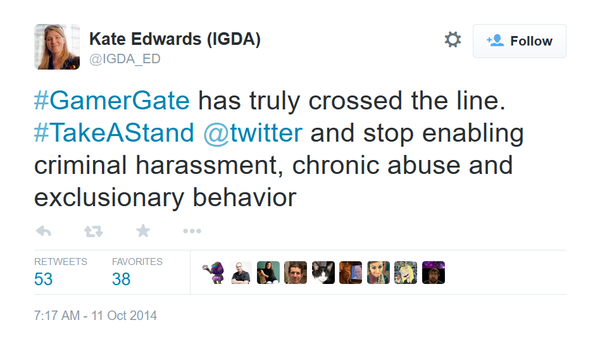 She says this, despite the fact that no member of GamerGate has ever been tied to the death threats, or any of the harassment. In fact, third party trolls have repeatedly said they’re responsible. But liars like Brianna Wu and Zoe Quinn continue to have their fiction presented by the useful idiots in the mainstream media as if it was fact. Gamers know better. They haven’t pulled the wool over our eyes.

IGDA backed down and removed alleged-meth enthusiast Randi Harper’s blocklist tool from their bullshit guide. Don’t give them any credit, however. Their allies spent the rest of the day and night piling on the poor guy from Puerto Rico, with Harper leading the charge. If I were Randi, I would spend more time focusing on paying my taxes, than blackballing developers out of the industry. Then again, she’s not very smart. And she’s also not going to succeed. People like her, and corrupt organizations like IGDA, are going to be named and shamed. As they should be. If you’re a freedom loving member of IGDA, I would suggest you leave this hateful organization immediately.