Good morning ladies and gentlemen, and welcome to another day of TheRalphRetort.com. Speaking of days, I would settle for a boring one right about now, but that’s not how I’ve ever rolled, as most of you readers know. I spent the overnight at the hospital with a family member, who turned out to be OK, thankfully. While I was there, I trawled Twitter for lulz and news, like I usually do. Same old shit, really. I got a cup of coffee on the way home, settled back into the command center here, and prepared for a day of work. But, I was rudely interrupted by this message at around 5:30AM EST: 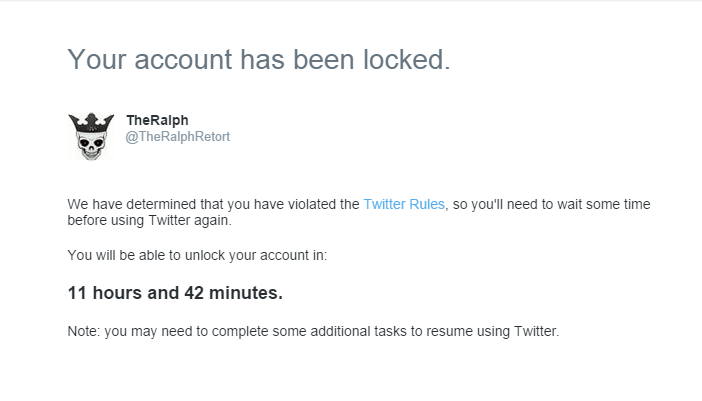 So, I’m locked out again until 5:30 PM EST. This is the second time this has happened in the last month. I suppose I’m going to have to be even more careful than I already was. There’s only two tweets I can think of that caused this. One is about Lena Dunham, and it was from this morning. I didn’t tag her in that, and it was nothing other people haven’t said. Plus, I don’t think Twitter Support has ever acted that fast. I’ll have more on Dunham in the next post. As for who I think the culprit was today? Looks like it was CuntOfVivian and its buddy VCR_Blog, but we’ll see.

Also, while we’re on the subject of Twitter, let’s go ahead and talk about LeoLoser. He crawled his furry ass back onto the site last night, and immediately started talking shit about me once again. It’s funny, because the video of my stream he cut up and released in order to make me look bad was one of the most shady things I’ve seen in awhile…and I run a fucking tabloid. People have asked me to respond to this for a week or so, and now I’ve decided that I will. I got all kinds of tweets about me hyping up my accomplishments, or being over-the-top when discussing my GamerGate work. Well, the thing about that is, I’m always responding to people who dishonestly claim that I’ve done nothing important over the last year. Leo said this on my stream, actually. He can tell all the lies he wants, but facts are facts:

Oh, and the time he used The Guardian screenshot without crediting me? You know, the thing that started all this? He said he did it for presentation purposes, but this DM shows the real reason. 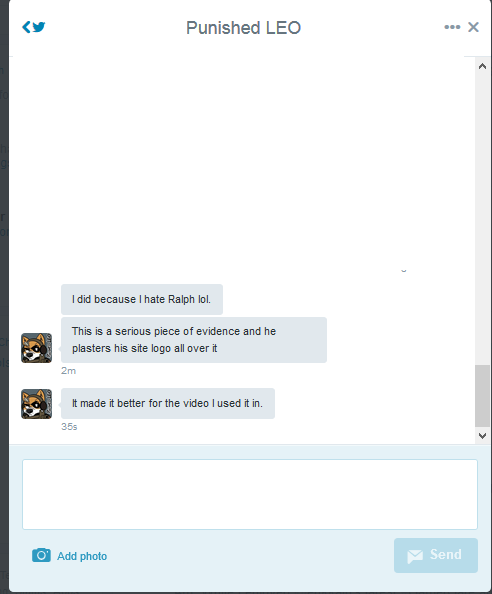 So, it is what it is. I don’t respect people that lie about me. Did I act foolish on the stream of mine he joined? Yes. But what’s more important, some salty fuck lying about my record, or me raising my voice on a angry YouTube stream? I’ll let you be the judge. Keep in mind that he also intimated that I controlled Izzy Galvez and was the one behind his suspension. Utter madness.

Anyway, I’ll be back on Twitter late this afternoon, and right after that, we’re going LIVE with Matt Conway (@Mattaconda) for another Wednesday flagship edition of the show. Also, on Saturday night at the same time, 6PM EST, we’re gonna be joined by the one and only Janet Bloomfield. I’m very excited for that one, and I hope you all will be as well: